All our best wishes go to one of our founding members Roy Chatfield. His play will be at The Lights tonight.

You still have time to see Alfred v the Danes in The Great Wessex Bake-off, the secret of modification triple-X, a starring role for an Iceberg and more, as three actors romp through Hampshire’s history. More happy than horrible histories. A family show suited for all ages.

We are looking forward to seeing you there. 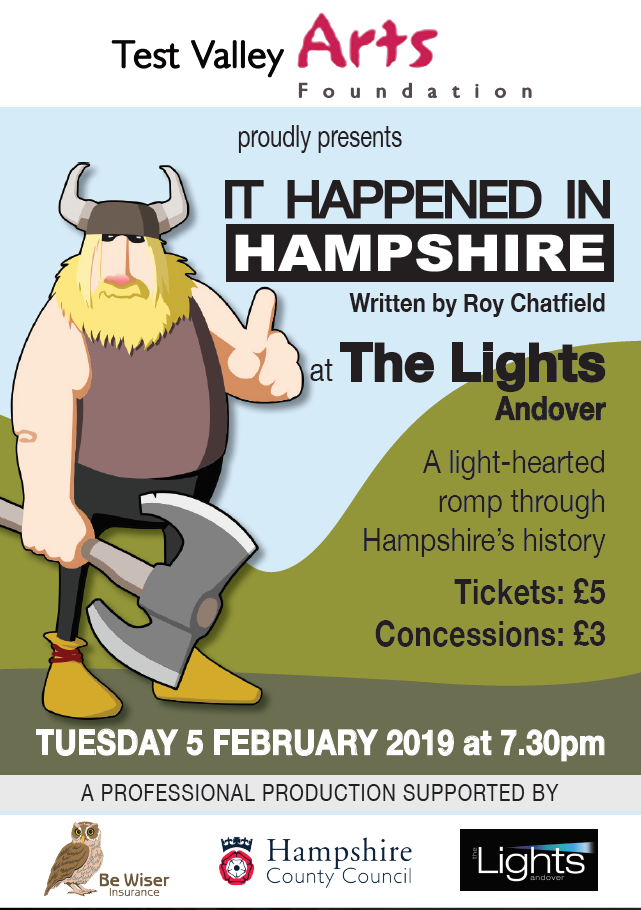 On Broadway this spring four of the ten new plays will be one actor plays. Is this a new trend?

The pluses are obvious. One-handers help theatres balance the books. For actors they are an opportunity to showcase their talents. But do they attract audiences?

Having a cast of one didn’t put them off Shirley Valentine. However, theatres are finding nowadays audiences respond better to one-handers that are genuine plays rather than traditional monologues.  A play focuses on what is happening now; a monologue is a story of what has happened in the past.

Of course, Shirley Valentine is, by that definition, monologue. Good writing trumps everything.

And is it a trend? Probably just coincidence.Though further rounds of theatre cuts may change that.

Last month the courts ruled that five actors in a fringe production of Pentecost were entitled to National Minimum Wage. The actors had previously agreed profit share contracts, but as the production made a loss there was nothing to share.

Equity, who encouraged the action, hailed the decision as a triumph in their campaign against low pay/no pay work for actors. To fringe producers it was a disaster.

That actors have been exploited by unscrupulous or lazy produces is beyond doubt. However, the union’s stance that paying the minimum wage will bankrupt nobody seems to bear little relation to reality. Pentecost had a cast of over twenty. Would a producer find the extra funding in today’s climate? Unlikely.

The keen-eyed will have spotted that the majority of the Pentecost cast did not join the case, despite the urging of their union. Indeed, some have publicly condemned Equity. For good reasons of their own, they wanted a part despite knowing that the prospects of being paid were negligible.

My guess is that both the triumph and gloom is overdone. Many actors see the advantage of profit share work. By giving them roles that they would not otherwise have, it can be a stepping stone to paid work. For that reason,  I think they will work with the fringe to find structures that work round the court’s decision. As the regulator for NMW is the Inland Revenue, who think such engagements should be self-employment for tax purposes, the prospects of anyone interfering in such arrangements is remote.

Writers are always asking themselves questions – what happens next? What is this character like? How do I resolve this?

One question often overlooked is why am I writing this?

Audiences won’t find your work interesting if you don’t. Find where your passion is and make sure there is plenty of it in your work. his sounds obvious, but we’ve probably all seen work that makes us ask the same question – why was (s)he writing this?

Oddsocks Theatre Company are bringing  The Comedy Of Errors to The Lights on Wednesday 3 July at 7.45pm.

This is Shakespeare’s only true farce, so it’s conjunction with Oddsock’s madcap style should provide an hilarious evening.

On November 13, the RSC follows The National Theatre and The Globe in transmitting a live performance to cinemas, in this case David Tennant in Richard II. Does it save us going to the theatre?

Personally I think nothing can replace the sense of being in the presence of something happening. The crowds that camped out to see the last royal wedding would think you’d missed the point if you suggested the view was better on telly. And just as well. the audience are part of the occasion. Without them, it is diminished.

I’ll still be booking for Richard II. Stratford is not convenient and seats are likely to be hard to come by. So three cheers for an initiative that enables more people to see great acting in great plays.

And it is live, with all the danger that implies. If anything goes wrong (an actor forgetting lines, getting the giggles or having their wig caught by a protruding nail – all of which I’ve seen) there’s no cutting room floor to hide it.

But keep going to the theatre. You, the live audience, is part of its magic.

The Bush Theatre opens its 2013 window for unsolicited plays from writers with no agent on 17 June.

For details on what the theatre are looking for and how to submit are on http://www.bushtheatre.co.uk/send_us_your_play/

The window closes again on 21 July. The Bush no longer accept unsolicited plays outside the window.

Rebecca Manson-Jones, of JustJones, has suggested an aspect of character that we often overlook – their relationship to their community. How useful this is will, of course, depend on how important the outside world is in your play.

She sees us as being one of the following (the explanations are mine):

June is a busy month for submitting plays.

Ark Theatre in Derby has a submission window open until 1July. For details go to http://www.artsjobs.org.uk/index.php?id=25&ne_source=dailyjobs&ne_post_id=100342

The 2013 Verity Bargate Award for new plays opens today. Guidelines are as follows.

Submissions opened on 1 June 2013 and will close on 30 June 2013 (6pm). Scripts submitted outside of these dates will not be considered.

The prize this year is £5000 in respect of an exclusive option to produce the winning play.

The award is open to writers resident in the British Isles and Republic of Ireland.

Writers may submit one unproduced, unpublished full-length play (not shorter than 70 minutes). There is no restriction to subject matter. Musicals and other forms of theatre are welcome but will only be judged on the text submitted.

The winner of this year’s award will be expected to attend a ceremony later in the year.

The judges’ decision is final and we cannot enter into correspondence concerning the result.

The following are not eligible: playwrights with three or more professional productions to their credit (defined as those produced under ITC/TMA/WGGB contracts), plays commissioned by Soho, previous Verity Bargate Award winners, plays that have already been rejected by Soho’s literary department. Submitted plays must be unencumbered and available.

The play must have a title page with the author’s name, address, email address and telephone number. In addition, writers must include a CV including listing of all works written/produced, when and where. Plays will only be accepted by email, in Word or PDF formats, other formats cannot be accepted. We are not able to consider any other supporting material including music, video, or images.

Please email your submission to vba@sohotheatre.com, within the dates stated above.