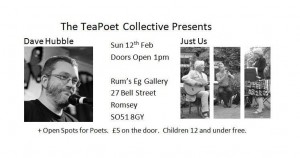 As it’s now over 6 months since the fundraiser for accessibility improvements, here is an update based on information provided this week by Rum’s Eg’s manager, Andrea Hancock.

A grant from Test Valley Borough Council for £25,000 has been approved, and an application for a further £25,000 from Hampshire County Council is currently in progress. The TeaPoet Collective raised £155 from the event in May 2015, in addition to over £80 raised at our pilot event in May 2014. We have asked Rum’s Eg for the total raised from additional donations, and we hope to be able to report this soon.

Rum’s Eg has received a number of quotations for a lift, all of which come to around £128,000 + VAT. It is hoped to have the funds in place by late summer 2016, with a view to starting work in the autumn.

The TeaPoet Collective is very grateful for your help with fundraising. Although our contribution is a drop in the ocean when looking at the total cost, the event in May did a lot to raise awareness of the need for accessibility improvements not only at Rum’s Eg, but at other venues.

We hope to keep you posted over the coming months on the planned improvements at Rum’s Eg, and we look forward to supporting similar projects in future.

In the mean time, it would be helpful to contact Rum’s Eg’s Community Project Development Team
(Siriol Sherlock , Mavis Sawdy, and Jill Searle) with any information or messages that would help support further funding for the lift project. They may be emailed via info@hampshireartandcraft.org , or write to Rum’s Eg, 27 Bell Street, Romsey SO51 8GY.

Thanks once again to anyone who has helped in any way with the fundraising for this project,
Syd Meats
on behalf of The TeaPoet Collective