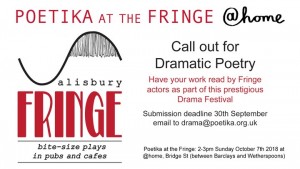 Salisbury Fringe Festival and Salisbury Literary Festival are both calling for poetry submissions.

Salisbury Fringe – the established festival of cutting-edge drama by local writers performed in a variety of informal venues during the first weekend in October. Poetika’s mission at the Fringe is to bring poetry to the drama. Poetika are seeking works of ‘dramatic poetry’ for the event, where they will be performed by professional actors.

To find out more about the Salisbury Fringe follow this link http://salisburyfringe.co.uk/

New this year- The Salisbury Literary Festival is  taking place over the last weekend of October it will be a feast of readings, talks and workshops, celebrating the best in literature by writers with a local connection and some from further afield.

Poetika has an event – City of Poems – as part of the festival, where in addition to presenting some of the best known poems written about the city, Poetika will be reading a selection of works specially written for the Festival by local people. Send Poetika Salisbury poems (max 5 mins) to be read at the event. Poetika is also creating a pamphlet of chosen poetry which will be on sale at the event and at other venues in town (all sale proceeds going to Poetika’s adopted charity, Childrens Chance).

You have until midnight on Saturday 30th September to email your pieces (5 mins max) to city@poetika.org.uk.

Despite the fact the Poet Laureate did not attend our meeting on Wednesday – probably because she hadn’t been invited – we had another good turnout including new faces and some welcome returners. Many followed our theme by reading some of Carol Ann Duffy’s work, but there were plenty of original contributions too.’Parking seems to be getting harder, despite the large Brown Street car park behind our venue, so it may be worth allowing an extra few minutes if you’re coming by car.

David King did the customary introductions before beginning with Prayer by Ms Duffy – “the truth enters our hearts, that small familiar pain” then followed with something of his own, though he “can’t stay here, because the air’s too thin”. Graham ‘Gray’ Turner continued by “feeding the chickens that laid the golden eggs on our fantasy world”, then Edwin read us History by Ms Duffy – “She’d seen them ease him down from the Cross, his mother gasping for breath, as though his death was a difficult birth”.

Vic brought us a musical interlude where he sang of Salisbury’s dancing man, where watchers were ‘itching to move their feet’, then Mike dribbled about ‘toddlers with tools they may grow up to use”. John made sure he was first to jump the Christmas gun by reading the Laureate’s ‘Christmas Eve’, before reminding us all of the sad news that Leonard Cohen had died, by reading his ‘Poem’ – “I hear a man climb stairs and clear his throat outside our door “. David Robinson followed this with a further tribute to Cohen – ‘The Stranger Song ‘ – “I told you when I came I was a stranger”, before James surprised us all with his assertion that he knew Carol Ann Duffy “before she was gay”.

It was nice to see Papa Webb back to wonder why King Kong or Godzilla had never won an Oscar, and how he’d been “at sea all day, and caught Rockall”, and Inga, who told of “blue grey eyes, that make women want you”, and she wished “that you could be me, for one hour”. Nicky followed with ‘Stealing’, by Carol Ann Duffy – “You don’t understand a word I’m saying, do you?” before performing one of her own – “uncertainty is the new certainty”.

Alison read Cohen’s ‘A thousand Kisses Deep’ – “And then consented to be wrecked, A Thousand Kisses Deep”, Lenka then gave us her Autumn Sketch – “is an afternoon walk, before the dusk brings its dark shadows”, and David King wound up the first half with another from Duffy – ‘Drunk’ – “unseen frogs belch in the damp grass” – was he suggesting something?

The second half saw David King get us going with Duffy’s ‘Litany’ – “A tiny ladder ran up Mrs Barr’s American Tan leg”, before David Robinson returned with a short selection from her collection ‘The World’s Wife’ – including Mrs Icarus and Mrs Darwin. Mike was back with more flash fiction – “squinting through a wall you’ve always found opaque”, and Papa Webb entertained us again with a cautionary tale about the dragon at the door.

It was Vic’s turn again and he brought us Duffy’s ‘The Dark’ – “there’s nothing to be frightened of at all. (Except for aliens…)” then performed for us Leonard Cohen’s famous ‘Bird on the Wire’. Inga returned having been asked “do you want a hand with that, Luv” and told “get down you crazy mare”, and Nicky told us “this kid’s so unpopular, even my imaginary friends have left me”. Lenka treated us to a short children’s poem in her native Czech, ‘Little Bear’, and was good enough to translate it into English for us too. David King then closed proceedings, warning us that “time is a thief in black and white” and that “we rarely notice how fast slowness happens.
It was another great meeting, and thank you all – everyone who came to share their and others’ work, and also those who came just to listen. Our next meeting will be the Christmas one – now we meet on the third Wednesday this means it will be very close to Christmas – on the 21st of December – and we do hope you’ll be able to come.

We’ll be meeting in a different venue to leave the Cloisters free for Christmas dinners and also to allow us to bring our own Yuletide refreshments – so make a note – for next month only we’ll be meeting in St Thomas’s house – on the corner of the walk through between Dinghams and Cote Brasserie (was Snells) – St Thomas’s Square. Opposite St Thomas’s church. We’ll be providing mince pies and a little alcoholic and non-alcoholic refreshment as there is no bar (you are welcome to bring your own), and our theme will be Christmas – and traditionally we celebrate the lighter side of the season – so bring your more humorous work! But more details in our event invitation nearer the date.

To finish off, it was interesting to hear from David Robinson that there is a longer version (finally finished in 2009) of Leonard Cohen’s ‘A thousand Kisses Deep’ than the one Alison read – so here it is:

You came to me this morning
And you handled me like meat.
You´d have live alone to know
How good that feels, how sweet.
Anonymous, and hard, and fast –
(I´d know you in my sleep) –
Then born together, born at last
A thousand kisses deep.

I loved you when you opened
Like a lily to the heat.
I´m just another snowman
Standing in the rain and sleet,
Who loved you with his frozen love
His second-hand physique –
With all he is, and all he was
A thousand kisses deep.

All soaked in sex, and pressed against
The limits of the sea:
I saw there were no oceans left
For scavengers like me.
We made it to the forward deck
I blessed our remnant fleet –
And then consented to be wrecked
A thousand kisses deep.

It´s true that you could lie to me
It´s true you could to cheat
The means no longer guarantee
The virtue in deceit.
That truth is bent, that beauty spent,
That style is obsolete –
O since the Holy Spirit went
A thousand kisses deep.

(So what about this inner Light
That´s boundless and unique?
I´m slouching through another night
A thousand kisses deep.)

I´m turning tricks; I´m getting fixed,
I´m back on Boogie Street.
I tried to quit the business –
Hey, I´m lazy and I´m weak.
But sometimes when the night is slow,
The wretched and the meek,
We gather up our hearts and go
A thousand kisses deep.

(And fragrant is the thought of you,
The file is now complete –
Except what we forgot to do
A thousand kisses deep.)

The ponies run, the girls are young,
The odds are there to beat.
You win a while, and then it´s done –
Your little winning streak.
And summoned now to deal
With your invincible defeat,
You live your life as if it´s real
A thousand kisses deep.

(I jammed with Diz and Dante –
I did not have their sweep –
But once or twice, they let me play
A thousand kisses deep.)

And I´m still working with the wine,
Still dancing cheek to cheek.
The band is playing “Auld Lang Syne” –
The heart will not retreat.
And maybe I had miles to drive,
And promises to keep –
Your ditch it all to stay alive
A thousand kisses deep.