From the start of the show, the theatregoers heard toe tapping popular, sing-a-long songs, well sung. I was curious to see how the change of musical director effected the group, however the cast is confident in its delivery and we heard 4 part harmony clearly. There was one wobble at the opening song of the second act however the audience knew the song so well, we sang along in harmony with gusto so I doubt anyone actually noticed.

I am biased because I staged managed for two of Unity’s shows, to introduce my son to live theatre. Thinking about what could be improved I realised the whole show was excellent and any improvements are just little picky things that most audience members wouldn’t bother with because they had a great time.

The show was well written for family entertainment with the right balance of slapstick, tap dance, song and dance routines, jokes for the kids and jokes for the mums and dads. It was English pantomime at its best with a big hearted dame, a comedy side kick, a zoo load of things to do for all the actors and lots and lots and lots of puns.

Special mention to John Seculina, as Noah, who is a humble actor who can hold an audience enthralled. When John scolded God because Noah thought it was a cold call the audience were in stitches. We enjoyed Noah’s family mopping the arc and Yvonne West as the Raven.

What we loved most of all was the children. Unity’s strength is the cast’s ability to let anyone have a go. Two of my special needs actors from The Brilliant Drama group are regular members. Unity have a strong children’s section and this year the children enchanted the audience.

There is an element of “Oh they are so adorable,” and “Look that’s my son/daughter,”. It’s that wonderful pride you feel at the school play.  However this year the children scenes were competing with the adult’s scenes for professionalism and polish.  The doves modern dance scene took our breath away, the children’s singing was fab and the dialogue made us laugh.

I just wish The Lights surround sound and hand help mic’s had a better range. We strained to hear the softer spoken children at the back. It was a shame because they were fantastic actors and special mention to the chickens. My other picky point was mid point there was a long  dance number where the foxes chased the chickens. The stage was very full and there was so much to look at, a lot of people missed the foxes stage action with the chickens, which was a pity because it was very funny.

It helped the script was balanced and clipped along at a rate. The audience felt so at home, the children in the audience became funny hecklers. Sharon O’Leary worked hard in her slapstick scenes with Jez Jameson. I could hear the children giggling away, just waiting to see what mischief the actors would get up to next.

It was a pleasure to watch a cross section of Andover’s community enjoying their friends and family having fun on stage. This year Unity’s Oh Noah you don’t was the best pantomime show they’ve done. They will have to work very hard to top this one next year. 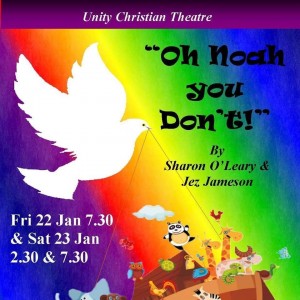 Poster for the show