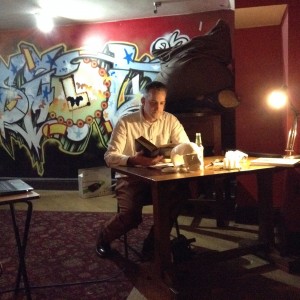 Ben reading to us from his show

Ben Johnson’s first poetry show is a philosophical dialogue on creation and robotic life. We meet Herbert who’s life has such an impact on a curious boy, it inspires him to create intelligent robotic life. Johnson’s narrative is personable and gripping as we follow our young boys Shelly like journey on the death of his uncle and his thwarted desire to said uncle back to life. We move into a brief history of robotics and  on to a personal views for and against robots.

Johnson’s show is engaging and full of multi-layered interlinked images. His delivery wouldn’t be out of place on Radio 4, Click or as a television documentary for Sky Arts. The set has functioning robot Ozymandias, a robot Johnson build himself over the time he created the show itself. The body parts were printed out on a 3 D printer and Ozymandias brings the future world and its robotic challenges to life. Johnson shows us singularity in an operating robot when Ozymandias speaks in the show.

His poems range from straight forward free verse narrative to biting satirical ballads which chilling list poems about the rights or lack of rights of robots. The show is interspersed with video clips that juxtapose or support his narrative.

His dry humour also subjects T.S Elliot to the Turing test. The conclusion is hilarious. His tackling of human morals and how they apply to robots via Christian creation myth is a fascinating display of Chinese whispers on an ethical level.

Johnson’s future after he educates us about the uncanny valley, is to show us a world that first embraces then rejects robots. There are fascinating parallels to human rights history such as the robot taking the bus and the bigoted results. ‘No Robot’ remains my favourite piece listing everything a robot cannot do such as own a cat. Johnson pushes us to think beyond our limited view of machines.

I was interested to see how Johnson was going to present his show. He isn’t a theatrical performer and reads his poetry. His clever work around, reading from a book, which just happens to be a bible, works very well because he works hard to maintain his eye contact and engagement with the audience.

Johnson’s show is so rich, I would be happy to see this show several times, to fully absorb and appreciate all the varied views and points he puts across. My only challenges were he needed to slow down and leave gaps between his links and the actual poems to give the audience time to digest the rich tapestry of ideas and images he presents. We also needed the robots voice to be louder, the venue competed

On a personal level as a poet Johnson’s poetry is so finely crafted it makes me want to be a better poet.  Two of us have decided to write or finish writing our shows and have a live reading in April. This is the effect a good work of art can have. y I have a deep interest in robots and robotics and Johnson’s offering is an excellent interesting humane addition to the debate. 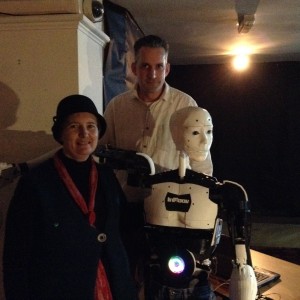