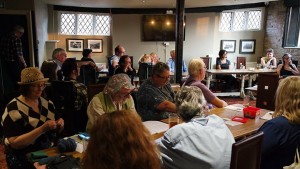 To provide you with plenty of airport lounge reading we’ve saved up two Echos for your delectation:

Nicky Michelle Harris gave us a precis of the Declaration and its 30 articles, then read the stunning poem by Maya Angelou, I Rise:
Just like moons and like suns,
With the certainty of tides,
Just like hopes springing high,
Still I’ll rise.

Ria reflected on migrant refugees in dire marine straits: Your legs buckle like a tired horse …. And – packed like sardines: Is all this water one long cemetery? Perhaps the sea is the only place that will take you.
Then from Rupi Kaur, a love letter to the world: I will carry you to freedom.

John B:  written after the Peterloo massacre in Manchester:
Ye who suffer woes untold
With folded arms and steady eye
Rise like lions after slumber …
Ye are many, they are few.

Vic described getting caught in front of an English Defence League march – the police evacuated them through a shop.
I’m a judge, I’m a jury
I’ve already found you guilty, don’t you know.
You’ve already lost the trial.
But the problem is …
You’re the judge, you’re the jury
And it seems I have lost the trial.

Tianna read Disrespect:
I’ll put on my big girl smile
While your demon children demand toys
We haven’t got.
Lying in bed wishing I was anyone but me
… Too rich to live in, too poor to move out
This is my fifteen minutes to dream
Of a better life.
… My rights which you apparently don’t receive
With your badge and your hat.

Susie talked of the human right to speak out, the human right to be looked after, and how they surprised the children to whom she taught the UN Declaration.
Then she read us a poem about the mixed blessing of owning the dream swimming pool:
Day by day it eyed me reproachfully: come and swim!
…But it’s raining!
That shouldn’t stop you – I’m wet already!
… Some dreams are over-rated.
Susie’s eldest daughter Amber lives in Madrid. Her friend lives in Tehran. They go to visit her.
Bright juices, ancient pastries,
Tehran so polluted.
Friends from Madrid, so different here.
Her lively girlfriend from Madrid submissive, almost fauning.
… Child-like, compliant, trammelled, returning to value the openness of her life in the west, counting her freedoms.
Train solutions:
You’ll have to believe in it – it’s just so ingenious.

Edwin read a poem about refugees ‘crawling from the ocean …
Darling could you rub my back with suntan lotion?’

Nicky again, saying she was so nervous she was imagining us all naked!
Describing how fascism is on the rise again, she read her poem Filling Your Boots:
Neoliberalism Trumps Egalitarianism
Fascism is the new fashion darling
There’s only so many times you can eat your own shit
Before you die of your own poison
They’re eating from their own Brexit exit
Love, peace and altruism always flies higher
Humanity always wins.

Then a quick vote to decide July’s theme. Sex and sexuality won over Summer, and Innocence!

John B read his poem complicit – things happen because people let them.

Kyra
How do you let someone know
Your vulnerability has become your personality
Love … the kind you feel in your soul, your gut
…Still fumbling for the right words
The kind that make your bones crack
… You can’t carry all this weight on your shoulders.

Anna, on behalf of her friend Pete
Voyage
The windows are open but closed
As she sets sail with him
… Smudging the beads of moisture
Along her lip
… Seals stacked up on the shore
And your hair is like a hairnet to catch the sun.

Ross gave us Byron’s suggested epitaph for Lord Castlereagh:
Posterity will ne’er survey
a Nobler grave than this:
Here lie the bones of Castlereagh:
Stop, traveller, and p—– !
Mark Jackwood
A country needs a resource
We’ve fallen back on artists
Surely we have enough misery
To produce a crop of those?

Alison read Carol Ann Duffy’s Last Post:
There’s coffee in the square,
warm French bread
and all those thousands dead
are shaking dried mud from their hair
and queuing up for home. Freshly alive,
a lad plays Tipperary to the crowd, released
from History; the glistening, healthy horses fit for heroes, kings.
You lean against a wall,
your several million lives still possible
and crammed with love, work, children, talent, English beer, good food.
You see the poet tuck away his pocket-book and smile.
If poetry could truly tell it backwards,
then it would.

Tim
The opening – first chapter of the Koran
Refugee man of Syria
You stake out our fear of your crescent-shaped moon
In the name of God the Compassionate
Just you being here
Opens the Other in us.

Cat read a poem about how our opinions are manipulated.
Traffic light system we know like the back of our hand.
As we sit on the M4 in a traffic jam
Discussing the price of ham.

Mike read 3 sonnets
Using pain as an argument
To fix your reasoning
… Make them see you
When they look in the mirror
Right is the thing that everyone has wrong
When they try to take away
Not a right they have
But a wrong they choose to do
Since it is true, whatever they may say,
We are a whole
And suffer as one.
I scrape orange peel on my cereal
And click a card to someone in goal.
Teach me to use what little power I have
To save the less lucky from prison and grave.

Anna’s Words and Soldiers
Drifting down the empty street
Flooding into dead men’s feet.
To a friend
I know they told you no
I know they said you’re wrong
One day we’ll dance away
And not listen to a word they say.

Ian’s poem on protest:
Why are humans obsessed
With owning the best?
… Dare to protest.
… The words like bullets from a gun.
Silence allows the haters to win.

Ria’s Cat’s Cradle
Basking in those days
When the heat went misty then clear.
Then a poem about a wedding in India.
… The endless hall
Of force-feeding feast and the famine.

Vic sang Lost in Translation:
I thank God I am a citizen of heaven.

Nicky again – for Connie and Sheila
You’ll be lucky in love
If your head rules your heart
But do the right thing
And wear a condom!
And what her mother used to say …

I haven’t done one of these in a while and it’s a privilege to bring you a taste of our July meeting:

It was myself that started by mentioning the George Herbert talk on 7th August – details here http://www.georgeherbert.org.uk/about/2018_programme.html

Alison was the first to read with her first ever sonnet, Elan Vitale (now featured on poetika.org.uk – if you want to feature your works here please get in touch). Following her velvet stallion’s back, Grace lived a whole life in less than two months (you fucking whore) and David banged on about ships in the night, somewhere between the belly and the brain…

After kissing your shoulder, kissing your thighs, Edwin was holding your boobs, Tianna told her story of self-discovery, and said ‘No’. Kira told us about a girl who has flowers blooming in her ribcage, and Nicky pointed out that sex was more trouble than it’s worth.

Cat and Mike reminded us of the Colourful Adventures of Merciful Grace (Sat 4th August details here), before I (that’s me – John!) started apart and moaned about Monet and Ria gasped like wasps and bees (and bruised easily, like an ego).

Ian started our second half by talking about sex, baby, then Mike explained he’d rather receive a gift than possess. Anna, a sexy lady, was feeling confident, before Ross warned us that when life becomes subhuman, subhumans come alive…

Peter reflected that the wind and water were as soft as milk, before Nicky returned, asking if we wrote from our own sexuality. For Grace, the day she stopped loving him was no different from any other day, and David R had a second chance to warn us your kiss stings sharp and sweet.

Tiana stretched each syllable within an inch of its life before Cat dreamt of dog days that will burn and burn (topical!). Kira whispered how quietly the earth will mention your name, then it was Game On for Ria.

This was a fabulous Poetika with some really strong poems – a new wave of attendees has invigorated our existing members – everyone – keep up the good work!!

We have a break in August and will be back on Wednesday 19th September – meanwhile we’re looking for suggestions for our September theme/prompt – if you have any ideas, please reply to this newsletter or comment on Facebook.

Have a great summer!