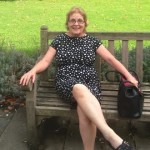 When Bobbie was 11, she wrote a poem about a cowboy. Her teacher said, “There’s real feeling here.” Bobbie comments “I got a good mark for it.”

As she enters her third age, Bobbie’s poetry is helping her educate people about another passion, Parkinson’s disease.  In her poem ‘Control Freak’ she says;

Bobbie was working in Tidworth Library as a library assistant when she was diagnosed with Parkinson’s in 2002. Parkinson’s disease is progressive neurological condition.

People with Parkinson’s don’t have enough dopamine because some nerve cells in their brain have died. The chemical dopamine is produced naturally in the body and functions as a neurotransmitter. It is part of the pleasure and reward pathway of the brain and is involved in memory and motor control. Symptoms of Parkinson’s include depression, shaking, moving slowly and stiffness.

Bobbies first reaction to her diagnosis was a private prayer of “God don’t make me bitter,” She decided to become a good finder. Bobbie is adamant poetry has helped her retain a sense of who she is and it has not let the Parkinson diagnosis eat her away.

At a difficult time where a lot of people would be afraid to go out in public Bobbie became a staunch crusader for people suffering from Parkinson’s. She has written two poetry books “Finding the light” and “Reflecting the light” to raise money to fight the disease.

Bobbie’s poetry crusade started in 2003, when an intuitive friend said ‘I’ve a vision of you as a poet.’ Bobbie went home, wrote a poem and just left it on the computer.  But after writing her second poem ‘Freak’ she realised life had changed.

“I’m quite proud of the book. The best part of putting the book together was choosing the cover. I write when I feel like it, so it’s not every day or every week. I tend to write about things that inspire me.”

Bobbie’s poetry is accessible, connecting with her audience at a visceral level.  She is very good at capturing emotionally charged moments in time. Her poetry is easy to understanding, using rhyming schemes that her fans enjoy. Bobbie’s audience can read her poems and immediately connect with the subject or character she is writing about.

“I started showing people my poetry and the more I showed, the more I wrote. Then I did some little booklets and handed them out. But I wanted to reach a wider audience.”

Bobbie has been through a major change and acknowledges she’s gained as well as had things taken away.

“It’s given me a deeper insight into human nature. I’d like to think I’m more compassionate. When you met someone all you see is their clock face, you don’t’ see the real person. People are very quick to judge but don’t know the whole story. I have seen people look at the blue disabled badge on my car, and they watch me step out in high heels. I can see them thinking ‘why does she get a badge if she’s got high heels?’ but they don’t see the days I’m crawling around the house because I can’t walk.”

Andover and Hampshire audiences enjoy her poetry. She is a regular speaker at WI groups. You can find her books in many varied places around Andover as diverse as Beaker Button wool shop in Weyhill Fair to the Vine Trust Christian bookshop in central Andover as well as Amazon.

“It’s important to promote the books but it’s a double edged sword. I’m raising money for Parkinson’s and spreading awareness. I hope I’m not too pushy but on the other hand it’s the most important thing in my life.”

Bobbie has been a consistent supporter of the Andover Poetry competitions when it ran from 2011 to 2014. In the first competition she placed second overall and in the last she was 1st in the Andover section. You can still buy her 2011 winning poem as a post card on the Travelling Bookstall.